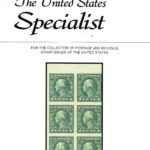 Ken Zierer has won the first WSP sanctioned Article Literature Award at the Sarasota National Stamp Show. Ken’s article “The Dubious Origins of the Scott Listed Variety #424e” received one of the seven Large Gold medals awarded to the 32 submitted articles. The article, published in 2018 in three parts, in the May, June and July issues of The United States Specialist can be found by browsing the digitial Specialist. The competition, the first ever for philatelic articles at a World Series of Philately (WSP) show was judged by Peter McCann, Chief Judge, Patricia Walker and Patrick Walters. It would appear from the favorable reaction by the collectors at the Sarasota event, that this new form of article competition, might become a semiannual event at WSP shows.

The United States Stamp Society has agreed to provide $3,550 to fund the digitization of the ... END_OF_DOCUMENT_TOKEN_TO_BE_REPLACED